I think i may have a problem. I’ve been on a bike for the last 9 days and my legs hurt. During the London to MC ride I had fantasies of stripping my bike down, selling the parts – leaving only the frame which i would hang from a wall (or put in the attic) much as one would a moose or a wildebeest.

Why then do i find myself sitting in front of my computer on a Wednesday evening (having only been back home for 3 days) looking at cycling trips. The route below depicts the coast to coast route. There is a very useful website with tips, places to stay and companies who will take all the hassle out of the trip. http://www.c2c-guide.co.uk

The question i keep coming back to is how long would it take? The website suggests 3 to 4 days is the norm (http://www.c2c-guide.co.uk/34-days/) but that under 24 hours is possible.

It certainly could be an interesting 24 hours… A bike, lights, a waterproof and whatever food and spares you can carry. Coast to coast in 24 hours…. for Joe Martin’s reference the record is currently held by Joel Toombs and Matt Shorrock at 7 hours 53 minutes and 03 seconds west to east on September 28th 2012

Could I really be considering getting back on the bike…….

It Couldn’t Be Done
by Edgar Albert Guest

Somebody said that it couldn’t be done,
But, he with a chuckle replied
That “maybe it couldn’t,” but he would be one
Who wouldn’t say so till he’d tried.
So he buckled right in with the trace of a grin
On his face. If he worried he hid it.
He started to sing as he tackled the thing
That couldn’t be done, and he did it.

Somebody scoffed: “Oh, you’ll never do that;
At least no one has done it”;
But he took off his coat and he took off his hat,
And the first thing we knew he’d begun it.
With a lift of his chin and a bit of a grin,
Without any doubting or quiddit,
He started to sing as he tackled the thing
That couldn’t be done, and he did it.

It’s fair to say its been a long week. It seems like a month ago that we set of from London. It’s been hard, challenging, painful but also a lot of fun and an absolutely amazing experience (not to mention diet plan).
A different hotel every night, your every need thought of and taken account of before you’ve even realised it. The routine, the team spirt that only comes with shared experience and goal will all end tomorrow. And I have to admit I’m a little sad.

However for experiences like this to work they have to end. The important thing is you start them.

We’ve been told it’s a relatively easy run into Monte Carlo tomorrow but I don’t believe them.

See you at the casino.

Today we cycled 94 miles from Moulins to Montbrisson. Tomorrow the hills start to come into play as we cycle 98 miles to Grenoble. We past the half way point today, in terms of mileage, which was a great boost. Temperatures have remained high and the promise of a pool at the hotel tomorrow should see everyone peddling that bit harder.

The scenery has been stunning with our route taking us through at least half a dozen towns or villages a day. To stop a take all the photos I’d have liked to is not possible but the below is a good example.

I’ve also been struck by the fantastic way we’ve been received. After I had my accident I popped in a local tabac to regroup and the staff and customers immediately began dressing my wounds and force feeding me arnica pills.
Earlier today a couple of us stopped at the top of a particularly tough hill. Within minutes a local gentleman had us in his kitchen filling up our water bottles and wishing us luck. He mentioned something about my belly being a little too big for such a ride but I’ll put that down to translation issues. 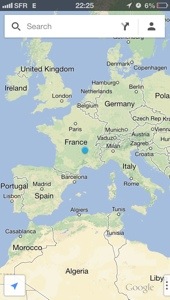 Feeling great 26 miles into day 5. Well earned slice of cake and cup of tea. You can take the cyclist out of England….. 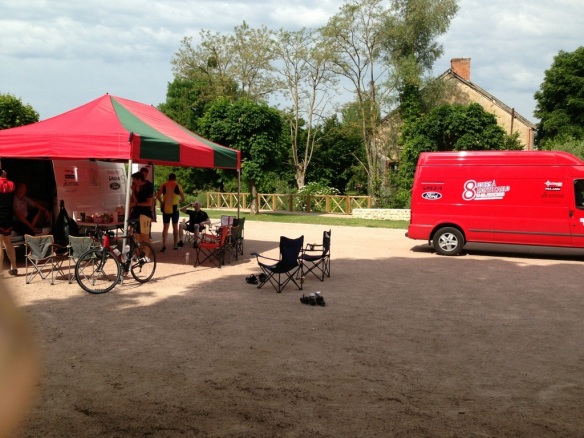 Well it had to happen didn’t it? Some idiot was going to fall off his bike at some point. Unfortunately that idiot was me. Coming round a bend a bit of gravel got under my front wheel and set me on course for a river. Breaks were no use so I had only one option, hit the deck. It wasn’t much fun but I was lucky to get away with just some bumps and scrapes.
Rich, our motorbike marshal, was on the scene in minutes to help and was able to call the mechanic to sort out my bike. Many thanks to both of them. The remaining 22 miles of the day were extra hard but I made it to the hotel. Last of all the riders but I made it.

The fall was enough but temperatures were staggering today (see photo of hot author). By 11am it was over 30 degrees and it peaked at 37.5. I drank 20 litres of water but still felt constantly dehydrated. Without a doubt today was the toughest physical challenge I have undertaken. All well and good but with the alps just two days away I think it’s only going to get harder.

Although it hard it is also an amazing experience, one which I recommend highly. What’s that? An annual event I hear you say? We’ll see…..

Don’t forget to also check out the posts at http://www.efinancialnews.com/montecarlo

We finished day 3 in Veirzon which, I don’t mind pointing out, is a bloody long way from London! Another gruelling day in the saddle saw us notch up 108 miles through breathtaking countryside. The days are split into 4 with a morning break, lunch and an afternoon break. The fantastic crew race around in the two vans (and motorbike) to ensure each stop is ready to receive the weary riders with hot drinks, cakes and sandwiches. They are amazing and leave the riders with nothing to worry about but getting from A to B.

The challenge is tough but I guess that’s the point. As a group we are raising money for the Wooden Spoon Children’s Charity and as riders we want to earn your sponsorship. Well I can assure you that to a man everyone is giving there all so I encourage you to support the riders with a donation. Every penny counts.

The alarm calls are set for a 7am breakfast and a 7:45 departure. All that awaits is a mere 90 miles which will take us down to Moulins. 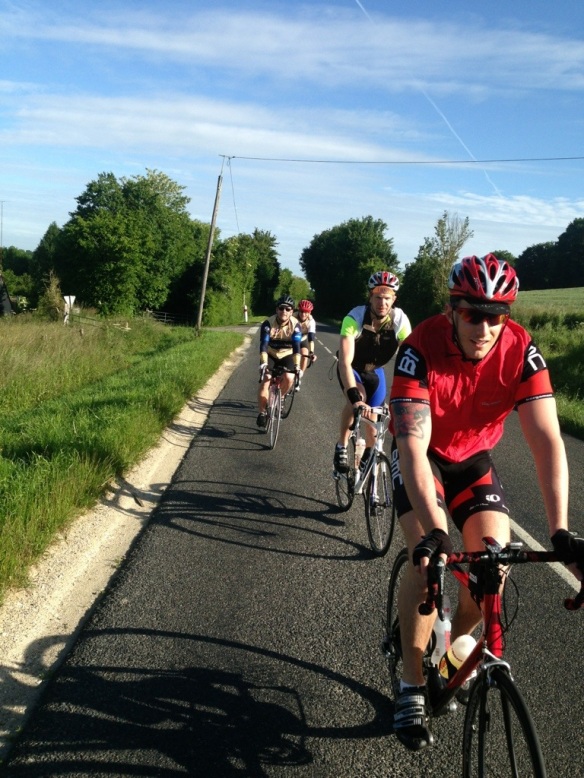 My Tweets
The novice cyclist
Blog at WordPress.com.