We all have to speak in public at some point. It could be a wedding, a funeral, a work presentation, an awards evening… a few people LOVE it but the majority of us get nervous, get through it and then have a mix of relief and adrenaline once it’s over.

This morning I had a new experience in the field of public speaking.

On the day we set off for Monte Carlo my son, Sam, made a sign (“Go Team FN”) and waited for us to pass the Wandsworth roundabout on our way out of London to Portsmouth. Not surprisingly he was late for school that morning. When he did arrive the teacher suggested he tell the rest of his class where he had been. Wearing the cycling hat I had given him when I passed and holding the sign he’d made he told the room that his Daddy was cycling all the way to France. (I did point out later that he should have added the word “south” as to merely get to Normandy wasn’t all that hard.)

Therefore when I received the invitation to go into his class and tell them all about the ride I followed in my sons footsteps and prepared to stand up in front of a room of 30 five year old children and attempt to engage them. The school pulled a fast one this morning as I strolled in dressed in my Lycra and wheeling my bike. “Ah,, Mr. Wright. class 4 b and 4 c are interested in hearing about the ride… please set up here. Two minutes later I had 94 Five year old children looking at me expectantly.

It went well. The format was;

§ The bike ride. What we did and what we saw. Big shout out to Marmots
§ The bike and kit.
§ Lessons learned
It strikes me that the lessons learned are not just relevant to Five year olds

1. Aim big. You’ll be surprised what you can achieve if you try.

3. Do things with people you don’t know. Be open to new friendships and adventures.

4. Do things for other people/charity. You’ll get a lot out of it

(the second one is fairly cycling specific I agree)

A big thank you to Sacha for the helping me get the pics blown up for the kids. (and yes the map you selected was better) 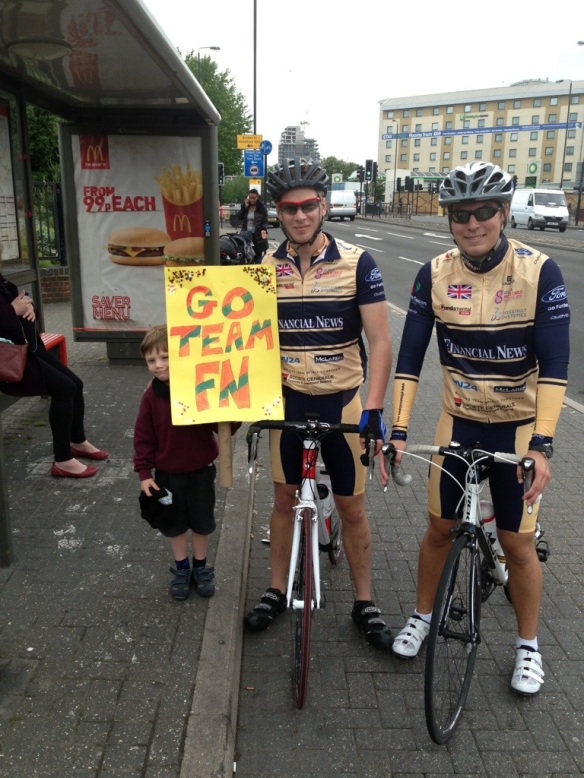 Couple of original jerseys in the @bicyclingnl office.
Back on a “bike” for the first time since I completed #theatlanticcoastchallenge Upgraded the gym with a @onepeloton Great to be back in the saddle. Snow ❄️ ⛄️ is coming but it’s toasty in here 🚴
New blog post wrapping things up. Link in bio. Thank you everyone for all the support.
Airport welcome committee and cake. Great to be home. Jules, Josie and her buddy Taylor (who stood in for Sam who was MIA).
I did it. #theatlanticcoastchallenge completed
Bye bye Miami and hello the Keys. Saw my first rd sign for key west and ended up on a lovely balcony after 82miles in the saddle. This place has a tiki bar and I’m off to find it. Last day tomorrow.!!! #theatlanticcoastchallenge #cycling #bikeadventure #bikepacking
It’s getting harder and harder to not ditch the bike, grab a cocktail and head for the water. Look at these Florida beaches and boardwalks. 2 days to go!! #cycling #bike #theatlanticcoastchallenge
This is Jay. He’s 70 and doing the same trip as me (but started even further north in Canada). We rode together for 20 miles today along Melbourne Beach. You can follow his adventures by googling “America one spoke at a time”. He very kindly slowed down for me on our 20 mile spin!!
Every morning feels like a treat waking up by Florida’s beautiful beaches. 91 miles ahead of me today as I head to Jupiter which will have me 266 miles from the finish line. #theatlanticcoastchallenge #sunrise #cyclingadventures #bikepacking
It’s amazing who you meet out and about on your bike. This is Jim Kern who, after his first career working on the space shuttles, founded #thefloridatrail, @americanhiking and wrote a few books. Lovely to have Jim ride with me for a few miles and point me in the right direction. The trip is most certainly about the people you meet along the way. @adventurecycling @floridatrail #theatlanticcoastchallenge #cyclinglife #bikepacking #adventuretime